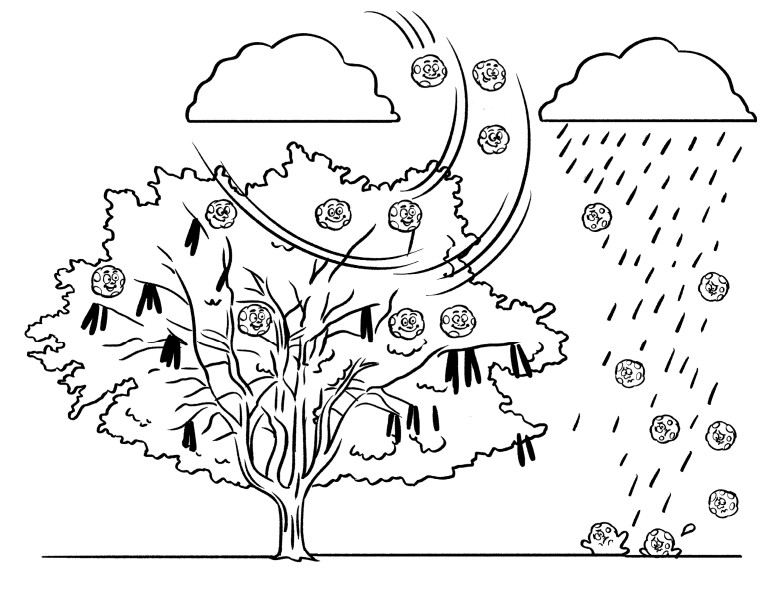 Are rain and pollenconcentrations correlated? There seems little doubt about that. Rain can wash the air clean from pollen. This graph shows the correlation between the average complainlevel (purple) and rainfall (blue) during two months. The rainfall seems to press down the complainlevel. On the other hand a short rain shower, can trigger pollenrelease by triggering mechanical movement.

Rain is liquid water in the form of droplets that have condensed from atmospheric water vapor and then precipitated—that is, become heavy enough to fall under gravity. Rain is a major component of the water cycle and is responsible for depositing most of the fresh water on the Earth. It provides suitable conditions for many types of ecosystems, as well as water for hydroelectric power plants and crop irrigation.

The major cause of rain production is moisture moving along three-dimensional zones of temperature and moisture contrasts known as weather fronts. If enough moisture and upward motion is present, precipitation falls from convective clouds (those with strong upward vertical motion) such as cumulonimbus (thunder clouds) which can organize into narrow rainbands. In mountainous areas, heavy precipitation is possible where upslope flow is maximized within windward sides of the terrain at elevation which forces moist air to condense and fall out as rainfall along the sides of mountains. On the leeward side of mountains, desert climates can exist due to the dry air caused by downslope flow which causes heating and drying of the air mass. The movement of the monsoon trough, or intertropical convergence zone, brings rainy seasons to savannah climes.

Rainfall intensity is classified according to the rate of precipitation: