Ragweeds are flowering plants in the genus Ambrosia in the aster family, Asteraceae. They are distributed in the tropical and subtropical regions of the New World, especially North America, where the origin and center of diversity of the genus are in the southwestern United States and northwestern Mexico. Several species have been introduced to the Old World and some have naturalized and have become invasive species. Ragweed species are expected to continue spreading across Europe in the near future in response to on-going climate change. Other common names include bursages and burrobrushes. The genus name is from the Greek ambrosia, the “food of the gods”. Ragweed pollen is notorious for causing allergic reactions in humans, specifically allergic rhinitis. Up to half of all cases of pollen-related allergic rhinitis in North America are caused by ragweeds. (source: Wikipedia) 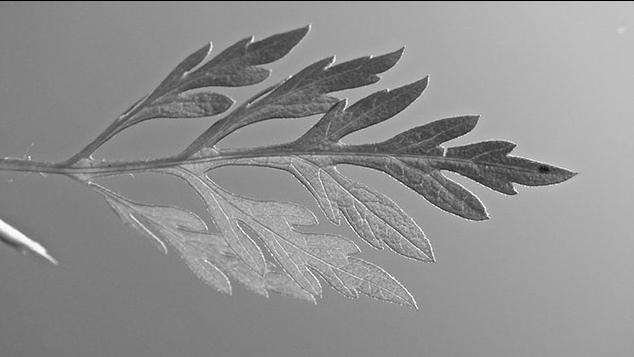 Ragweed pollen is a common allergen. A single plant may produce about a billion grains of pollen per season, and the pollen is transported on the wind. It causes about half of all cases of pollen-associated allergic rhinitis in North America, where ragweeds are most abundant and diverse.

Concentration of ragweed pollen—in the absence of significant rainfall, which removes pollen from the air—is the lowest in the early morning hours (6:00 AM), when emissions starts, and pollen concentration peaks at midday. Ragweed pollen can remain airborne for days and travel great distances, affecting people hundreds of miles away. It can even be carried 300 to 400 miles (640 km) out to sea. Ragweeds native to the Americas have been introduced to Europe starting in the nineteenth century and especially during World War I, and have spread rapidly there since the 1950s. Eastern Europe, particularly Hungary, has been badly affected by ragweed since the early 1990s, when the dismantling of Communist collective agriculture led to large-scale abandonment of agricultural land, and new building projects also resulted in disturbed, un-landscaped acreage.

Ragweed allergy sufferers may show signs of oral allergy syndrome, a food allergy classified by a cluster of allergic reactions in the mouth in response to the consumption certain fruits, vegetables, and nuts. Foods commonly involved include beans, celery, cumin, hazelnuts, kiwifruit, parsley, potatoes, bananas, melons, cucumbers, and zucchini. Because cooking usually denatures the proteins that cause the reaction, the foods are more allergenic when eaten raw; exceptions are celery and nuts, which may not be safe even when cooked. Signs of reaction can include itching, burning, and swelling of the mouth and throat, runny eyes and nose, hives, and, less commonly, vomiting, diarrhea, asthma, and anaphylaxis. These symptoms are due to the abnormal increase of IgE antibodies which attach to a type of immune cell called mast cells. When the ragweed antigen then attaches to these antibodies the mast cells release histamine and other symptom evoking chemicals.

For more information (in dutch) about Ambrosia visit www.pollennieuws.nl >>